CALIGNA: Provence according to l’Artisan Parfumeur

Last week in Paris, L’Artisan Parfumeur introduced Caligna, the only perfume of its Grasse Collection. A « back to the origins » collection launched in the fall of 2012, which the Artisan presents as a tribute to the crib of perfumery, Grasse, as well as the whole Provence region. If the house was founded in Paris by perfumer and chemist Jean Laporte in 1976, this collection allows it to remind us, using the evocative power of the mere noun Grasse, its artisanal know-how and the quality of its raw materials. Caligna, which is provencal dialect for « courting », proves to meet all these ambitions: claim a traditional French heritage and capture, on unexplored fields, the essence and sweet Mediterranean atmosphere of Grasse’s backcountry.

Composed by perfumer Dora Baghriche-Arnaud (Firmenich), who signs her first collaboration with the house, Caligna captures this landscape through its most characteristic aromatic notes. Rose, fig, lemon and jasmine meet salvia sclarea – a note usually not so much used in perfumery. These ingredients lay on a back note of pine needles that deserve some attention, since they are rendered by a Firmenich captive ( = a molecule patented by Firmenich) which is processed through heating fresh needles, thus moderating their green side and toning down on the eucalyptus facet. 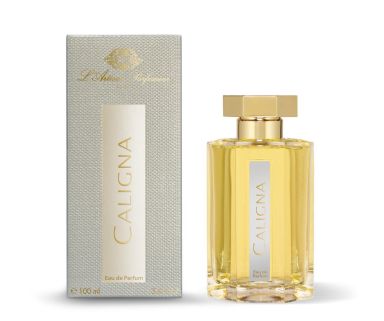 Caligna is not the first perfume – or French laundry brand – trying to recreate Provence’s incomparable smell and L’Artisan, a pioneer of niche perfumery in France, praised for its original juices, ventured through a difficult exercise where the olfactive commonplace could be around any corner.
If the juice in itself doesn’t belong to the most remarkable creations of the house, its real artistic commitment lies in formulation and ingredients. “I didn’t want a fragrance just about jasmine and rose, Dora Baghriche-Arnaud tells me on the first floor of the boutique on rue de l’Amiral de Coligny, where l’Artisan Parfumeur has gathered a handful of journalists and bloggers. I wanted an original woody note, she goes on, and I conveyed it using the pine as a base note, which is pretty uncommon”. Dora Baghriche-Arnaud also adds that the rose in Caligna’s formula is co-distilled with other flowers, which allows a unique result, giving the good old classic rose a nice modern twist.
Born in Alger, the perfumer grew up in Nice and thus has been around the Mediterranean Sea quite a lot. With the awareness that she had to suggest a contemporary interpretation of Grasse, she chose to trust what she wanted and convey Provence with the help of woody notes. “It’s with salvia, pine and olive wood that I did my very first proposition to L’Artisan, and I knew it was daring. They loved it”. Caligna was made for the Grasse Collection, but it will be part of L’Artisan Parfumeur’s permanent collection.

The Grasse Collection debuted last fall with a pair of scented gloves made in collaboration with French glove-maker Causse as well as two candles, Automne and Hiver. The launching of Caligna, in April, will accompany those of Printemps and Eté candles, and will close L’Artisan Parfumeur’s Grasse episode.